Four children have been found dead in a freezer after a game of hide and seek apparently went tragically wrong. 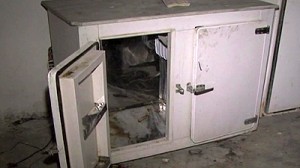 The children became trapped in the freezer. Picture: NTV

The bodies of the youngsters – all brothers and sisters aged between six and 11 – were discovered by their father in central Turkey.

After realising he had not seen his children for a while, the father, who works as a shepherd, found them at an abandoned house in Konya.

Huseyin Baysal, the town’s mayor, told NTV: “The children went to play after breakfast and got into a freezer, which then closed and locked, trapping them inside.”

The four are believed to have suffocated, although post-mortems are due to be carried out.

An investigation into the deaths has been opened.

The children’s family have questioned whether it was indeed an accident and claimed they could have been murdered.

“Kids cannot lock the door from the inside. When we found them one was on the top of the other,” their uncle Mustafa Ucer told NTV.

Brought to you by web design stockport