A 100km long traffic jam in China has entered its ninth day and drivers are being warned the bottleneck could continue for a month. 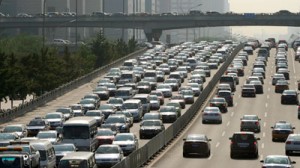 The road network into Beijing is struggling to cope with the volume of vehicles
Hundreds of trucks heading for Beijing on the Beijing-Tibet Expressway have been at a standstill because of roadworks in the capital.

Small traffic accidents or broken-down cars are aggravating the congestion which started on August 14.

But those affected have been taking the disruption in their stride.

Drivers have been playing chess or cards, with some joking “concerts should be held at each congested area every weekend, to alleviate drivers’ homesickness”.

And local residents have been benefiting from the queue too by setting up temporary stalls selling food and drink to the car owners.

There has been anger that some vendors have been making a small fortune by overcharging drivers for items including noodles and hot water.
If there’s no traffic jam in the city, that would be news.

Niu Fengrui from the Chinese Academy of Social Sciences
Around 400 police officers are at the scene 24 hours a day to make sure the situation stays calm.

It is hoped the roadworks will be completed by the end of September but congestion and road safety are a huge concern for Chinese motorists.

Traffic jams have been frequent since May due to the rapid increase of trucks to a daily peak of about 17,000.

Niu Fengrui, director of the Institute for Urban and Environmental Studies at the Chinese Academy of Social Sciences told the Global Times poor road planning was part of the problem: “If there’s no traffic jam in the city, that would be news.

“Our government should pick up the pace of urban infrastructure construction and spend some of its budget.”